The lone pig seems to show no fear. At the sight of a spider, he charges in with only his hooves as his weapon! After punching one in the stupid face, two more pop out of the webbed den and crawl toward him. Oh dear, it's three against one, and I don't know if I should help him. My wounds are still red and I shouldn't risk my life for someo-oh he's taking a beating. I should try to do something!

I have mapped what is officially a peninsula just a distance from Piggerton. It would be nice to take out the monsters living there and help out with building homes and defending the town. Piggerton may become a city some day, who knows! At least have a decent exterminator at the very least. I can see it now...

Five days have passed since my awakening here in the land of the weird. Is there a way out? Pigs seem to be the most intelligent species around here. Sad. Spiders seems to be the primary antagonist of the land. I have been vigilant of destroying them all.

A long day of slaying has passed. The Piggerton Peninsula is nearly cleansed of octo-legged killers. Night is almost here. Time to head back and use the spider glands to heal my cuts and bites. The next day I look around the northern savanna where I found a skeleton with some belongings. I shall investigate at dawn.

Spiders live only south of the area currently. The dens grow bigger. As do the beasts. Guardians live in the bigger homes and can jump far to attack retreaters. With help of the piggies, we take it down and shred it down to fibers.
That night, when I was using the villager's... fertilizer to start my fire, I heard loud cries in the distance. What was it? Was it the owner of the foot prints I've been finding all around town? 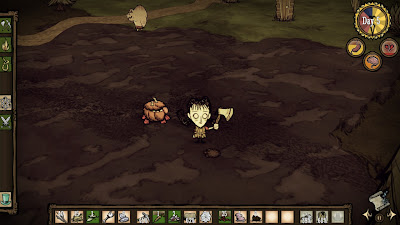 It sounds like it's coming closer. Better sharpen my spear OH SHIT 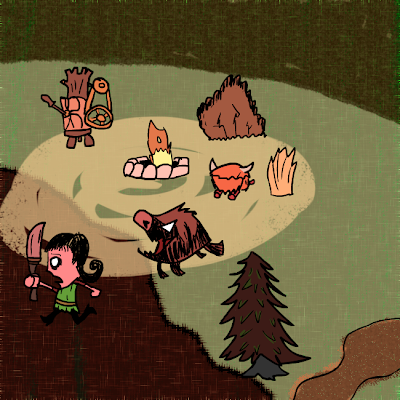 A giant dog is running towards me! I jump out of the way before it chomps me into shreds. Another one follows behind it at full speed and they seem to want my blood to paint the town with. NOT GONNA HAPPEN! 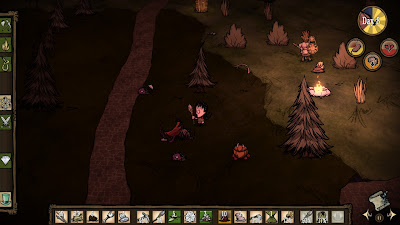 Day Nine. Today has thus consisted ridding the area of spiders and scouting the shorelines. Perhaps building a wall around Piggerton will help with keeping killers and creatures at bay. We could certainly use it. I worry about what lies in waiting under the moon.

On my journey south to largen my map, I encounter a shield of trees that appears to protect something foul. A mechanical door leads to another realm unseen by man. Let's have a look! 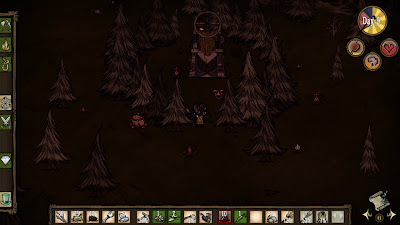 Find out about the door and Willow's fate in part 4!
Interested in playing the game? Click here. Game made by Klei Entertainment
Posted by Unknown at 14:43

Get an Email when I Update!