Chapter Two of my tale within "Don't Starve!". I play as Willow and make a story out of what I experience. I also like to add drawings for reasons.
For chapter one, click here.
If you're interested in this game to play for yourself, may I lead you to Klei's mini site for the game.
-------------------


Morning comes at last. The lights of the village houses switch off, and people are stepping outsiIIIIIIAAAAAH-

They're....giant pigs...Man pigs? Not huMAN. Wow. I can really smell them now. The pig people are quite shy. None of them seem to be aggressive, but nobody wants to talk to me. They seem to be sentient, even wearing pants made from grass!


This village has a lot to offer. There are gardens full of berries and carrots, and little ponds scattered to the north! The frogs are looking at me funny. They deserve to DIE! I swing at one and he manages to tongue the twigs out of me. He dosen't acknowledge the pain he's recieved before he topples over, legs up. I've heard frog legs are quite the delicacy. There's score one for Willow! It looks like he had relatives though, at least half a dozen. They leech their tongues at me and before I know it I'm surrounded! Oh god. 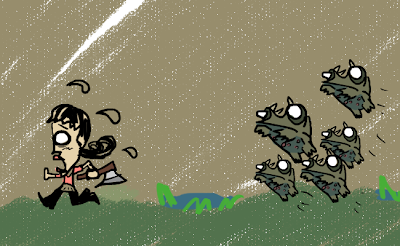 I run for my life away from the deadly bullfrogs and feel badly hurt. These frog legs will be delicious I'm sure, but I took an awful beating from it. Those frogs deserve to die. I best stay away from the ponds for now. What's this eye looking at me for?

It doesn't move, only stares in my general direction. What if I pick it up? Uh-oh. I hear something coming for me now. I can't run fast enough! It's gonna get me!! I close my eyes in acceptance of my fate. Oh no, I can hear it panting......like a dog? 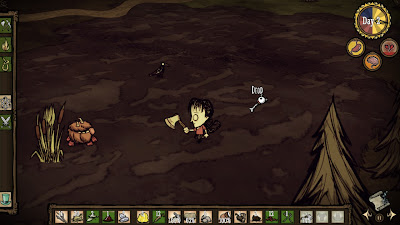 I open my lids, to see a friendly creature before me. It appears to be a walking pumpkin-dog with little horns on its head. Doesn't have eyes, though...am I holding its sight? It follows me wherever I go so long as I hold this eye bone around. It pants like a loyal companion, how cute!

It may be good for survival that I aquaint myself with the pig villagers in order to prevent becoming spider-food. I give one of them some of my berries, which seems to go immediately through him and out of him. I thought coffee was pretty bad for that. Shouldn't let the piggies into their garden unless I want to have a surplus of fertalizer. Perhaps I could use this to my advantage for farming?

As soons as late afternoon arrives, everyone runs home and hides. What do they run from? I understand about the whole murderous frogs and spiders deal, but those guys are MUSCLEY! They could easily take them all out in a few punches! What's really hiding in the dark? I should really try to make these folks my ally. 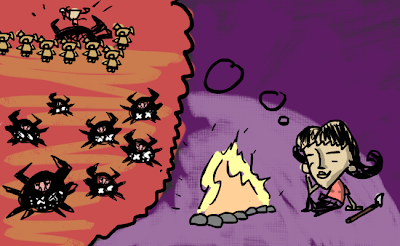 I should look around to see what I can find around here for usefulness. There's a giant boulder among the trees, and I break it into pieces with the miner's pickaxe. I find shortly after two spiders wandering behind the trees. One tries to jump me, but I cut it open with my trusty axe! Take that, ugly doer! Swinging away at it keeps the monster from hitting me back. He's cold and dead in a mere heartbeat.

Balls of webbing seem to almost surround the eastern part of the town. Are these creatures at war with each other? The spiders do come into the village after dark, so maybe that's why the pigmen flee into their homes and stay away from the door. I should do something about this. I'm still bruised up from the frogs though.

I better get a fire ready and patch up to help these guys out. That is the current plan. My companion huddles up near the fire and dozes off to sleep. He is useful and nice to have around. He's almost like a living treasure chest. Hm. I shall call him Chester! 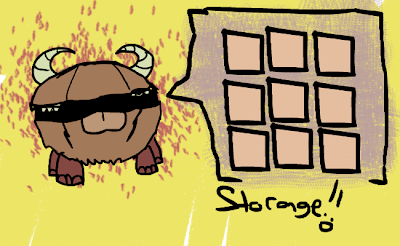 A new dawn awakens and its time to plan out our day. I use the brand new science machine to learn how to build a backpack and head out down the road past the village. I shall call this place "Piggerton". It's a placeholder for the time being. The cobblestone road has a beaten down path laid down into the Arachnid Woods. I'm getting pretty good at naming!


Arachnid woods has a mystery or two about it. By the shoreside, a lone grave is felt by the breeze. No one that I knew, or with a pig name. Egh. 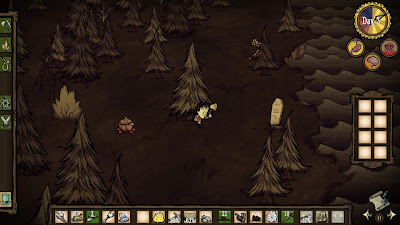 A stone bridge lays the way across a river to the south to the inner reaches of the untreked woods. A group of swine resides over here, with multiple tombstones and spider dens amok. What made the pig decide to live away from safety? Is he the guard? Or perhaps the prisoner?

Perhaps the best way to scout this land is to follow the shore and get a general idea of what's available nearby.

Get an Email when I Update!